I sit here writing this, wishing I could return to that life when everything was simple, easy and happy.

I remember the day I found out I was pregnant like it was yesterday. J was doing a workout, I had a gut feeling of something, but never expected to be telling him that our family was extending on that evening. I still smile now remembering him taking a couple of minutes to realise what I was telling him, I smile a little more when I picture his face just light up.

From that moment, our lives changed forever. Each day was filled with a thought or feeling of what was to come and small ideas flooding my mind for planning the new arrival of our baby.
We soon told our families and friends, unable to keep the excitement contained, of course everyone was overjoyed.

Initially, I had always thought I would want to keep the sex of the baby a surprise, but as it got closer to the potential time of being able to find out, we couldn't wait and found out we were having a precious baby girl.

In the following months, my pregnancy was generally uneventful, what they would call a "normal" pregnancy. Every checkup and scan was routine and each health professional telling us everything was perfect.

Then the birth... Waiting in no-man's land.

It was a normal Friday, my last shift at work and I was getting very excited, yet it felt quite surreal knowing I was just 10 days away from our due date. I had been physically and mentally ready for Ayla to arrive for the last week so was counting down the days to the unknown date I was going to get to hold my beautiful baby girl.

We picked up Ayla's brother from school, he had passed his writing test, we were so proud and went to clip and climb to celebrate. That evening I had done some meditation and pregnancy yoga stretches, not knowing this was the last time I would feel Ayla move- a BIG kick, thinking she was trying to do some yoga with me, or now thinking she was saying goodbye.

The next morning I woke up, anxious from a horrible dream. Our baby was a doll with a black plastic spinal cord and it had snapped. I am not normally spiritual or superstitious however this had really scared me. I realised I hadn't felt Ayla move since waking, it must have only been half an hour. I ate some marshmallows, drank some coke and had a big glass of cold water, lay on my left side just waiting... I felt nothing. As much as I thought I was still worrying about nothing, I took myself off to emergency. J stayed cutting O's hair and took him to soccer. Leaving the house with a kiss and telling J I would be back soon.

The emergency was quiet. A lovely nurse took me into a room, lay me down and put the doppler to my belly, the room was silent, I was just waiting for the beeping which never came. The nurse comforting me and explaining it was probably just her inexperience or baby Ayla had her hands over her chest. Still being naive, I believed her.

She took me upstairs, ironically to the birthing suite, with sounds of newborn babies and many women about to birth life. I was greeted by a midwife and told the doctor was on her way to scan my baby girl.

These were the longest minutes of my life.

It had probably only been about 20s of that probe to my belly and as soon as the doctor looked at me I knew. Those dreaded words "I'm so sorry, there is no heartbeat". I felt flooded with emotion, tears rolling down my face, I was in shock, I kept asking "why?". How could this happen at 38 + 5 weeks, only moments from our due date?

Ringing J was the hardest thing I've had to do. Not wanting the words to leave my mouth, not wanting to hear reality, I could just hear the trembles in his voice as he told me he'd be there as soon as possible. The next moment I remember I was wrapped in his arms with both of us uncontrollably crying into each other, kissing and hugging Ayla in my tummy, just like we were doing one day before but with her kicking back.

An ultrasound was needed to be done to confirm Ayla's death and to check whether there was an obvious indication as to why, I was squeezing J's hand so tight, both of us opening and closing our eyes not wanting to believe this cute little black and white picture was of our beautiful baby girl with no heartbeat.

As with the majority of ultrasounds post-death, the answer as to why was inconclusive.

I remember reading, in the initial few weeks after Ayla was born, a women's stillbirth story and she described the feeling of the time when finding out the life you have been growing for nine months is now no longer as "waiting in no-man's land". How accurate this was to my experience, lying on that hospital bed attempting to absorb the news I had just been given and the next few hours leading up to the induction.

At this point, the only thing my mind was focused on was, what had happened and how could our own daughter, who I naively thought was invincible inside of me, be taken from us. Only then to be shaken into reality and realise I had to give birth to Ayla, something I blocked from my mind as I kept thinking "this isn't how it's meant to be". J was brilliant, he was so calm and made me feel so protected, he just wanted us both to be safe.

After a numbing drive home to pick up our things, the induction was started just five hours after I had been to emergency. We waited six hours and the contractions started just after midnight. None of this felt natural and all the planning I had done to make labour as relaxing and smooth as possible, had turned to anxiety and fear for how emotionally difficult this felt, alongside excitement and love for the beautiful daughter we were about to meet.

On Sunday 2nd May, six hours later, Ayla's head was crowning and with one final push, she was placed on my chest.

I cannot describe the emotion that came over me. I had never experienced the instant love I had, and still have for her, how protective I felt over her and of course the deepest sadness of Ayla not being alive and breathing in this world with us.

I remember Ayla's skin covered in white cream, vernix they call it, particularly over her eyelids. I wish I could have seen her eyes, wondering what colour they would have been. She had amazing long eyelashes which she definitely got from her dad, also a cute little button nose and small little ears. We gave her the biggest cuddles, stroking her head and kissing her super soft cheeks, I never wanted this moment to end.

Unfortunately, stillbirth was much more common than I ever wanted to know. Six babies are stillborn every day in Australia, which meant the hospital was sadly very experienced in offering parents like ourselves the best opportunities to care, grieve and acknowledge the bond we have with our angel babies. It has been shown that for some mums and dads, being given the opportunity to name, bath, dress, create hands and footprints and having the option of taking their babies home can help with the grieving process and the bereavement journey. We were definitely very grateful for this.

​
The beginnings of the grieving process

We held Ayla gently in the water, she lay there in J's arms so peacefully as I carefully wiped her. She had always loved water, kicking away when I went swimming. We obviously had not planned for any of this to be like it was so we had not brought any clothes with us. The wonderful volunteers of charities like Rednose, SANDS and Stillbirth Australia donate clothes to the hospital, so we picked out a very cute white elephant onesie and a beautiful hand-knitted pink, blue, purple cardigan with a little pink beanie– she looked beautiful.

We spent more hours kissing, cuddling and rocking Ayla's perfect little body. That evening, it was time to say goodbye for now...

This was such a traumatic and unnatural feeling, you never imagine leaving your baby at the hospital and coming home with empty arms. It took all our strength to leave Ayla lying so snug and sleeping so peacefully in her cold cot, giving all our trust to the midwives to take care of our precious sleeping baby. Another numbing drive home, this time without Ayla inside of me. I had imagined this day for so long– I had picked out the perfect outfit, I pictured Ayla being swamped in her car seat, making many cute baby noises.

That night, we were both physically and emotionally exhausted. Falling to sleep fairly quickly however waking up early and realising it wasn't a dream. I had wished it was all a nightmare that I would wake up from, only that never happened. 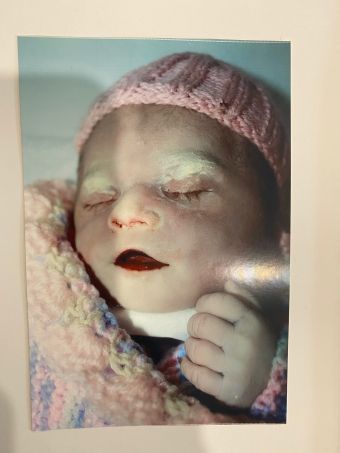