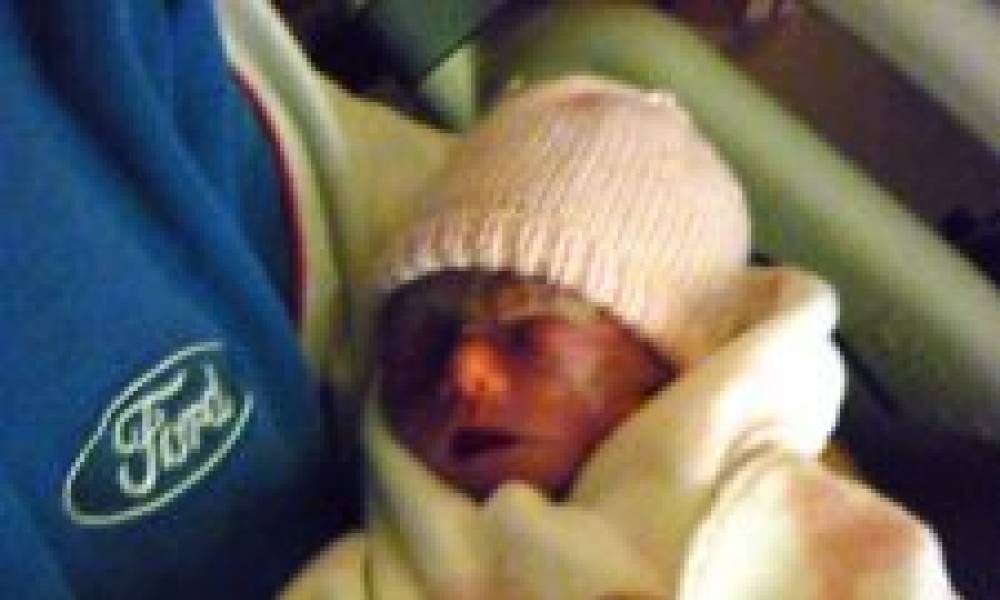 Andrew and I met in July 2012. I knew the first moment he kissed me that he would change my life. We found out that we were expecting our first child together (I have 2 boys from a previous relationship and Andrew has 1. They were 12, 6 and 2 at the time) in March 2013. While neither of us wanted to find out what our baby’s gender was, we were both hoping for a girl.

Our ultrasounds showed that everything was going well, the baby, who we nicknamed Squirmy Wormy, was right on size for both the 12 week and 20 week scans. I didn’t feel as much movement with her as I had with my boys, but that was put down to having an anterior placenta. The first hint that something wasn’t right was at 27 weeks. I felt that her movements weren’t as strong as they had been. At the hospital, they checked her heart rate, said it looked great and sent us on our way. The second trip, at 28 weeks, was for swelling and reduced movement.

Again, things were checked and we were told everything sounded great. I asked the midwife if it was because of the placenta that I wasn’t feeling the same kind of movements as before, she said no and left it at that. Not once were we offered a scan. At 29 weeks, I had a midwife appointment, she couldn’t find the top of my uterus and said that it was probably because I was carrying a little bit too much weight. I asked if I should be worried about the different kind of movements, more rolling then kicking. The midwife said no, that some babies prefer to roll then kick, that the heartbeat was good and not to worry. On Monday, 9 September 2013, while on my way home with my eldest from an appointment with his doctor, we were listening to Bon Jovi’s Living on a Prayer, Eloise gave me a mighty kick, it was that hard it made me gasp. That was her first and last big kick. I don’t remember if I felt her the next day, I remember feeling off and my stomach feeling heavy to one side. That night I had a dream and woke up screaming that I had killed the baby.

On Wednesday, Andrew had the day off and decided to go for a hike. I dropped my youngest off at school and came home, realising that I hadn’t felt the baby move that morning. I did everything to make her move. Cold drink, sugary food, warm bath, but nothing worked. I waited until Andrew came home, rang the hospital and picked up my youngest son from school. We arrived at the hospital and the midwife used a doppler to see if she could find our baby’s heartbeat. She found a heartbeat that was 112 beats but lost it almost instantly. She told us that the baby had moved away and wanted us to get a scan to check exactly where the baby was positioned. I remember sitting waiting for the scan, looking at pictures of from our 3D scan. My son, sitting there on the iPad, totally oblivious to what was happening. We were called in, I was joking about stressing the baby out and how sleepless nights were going to be the payback. When the ultrasound tech said those words “I’m sorry there’s no heart beat.” I thought that he was playing a sick joke. I looked over at Andrew and saw him crying, head in his hands. I think I screamed, I know I begged the tech to check again. My son hugged me. I’m not sure what happened next, but we were told that we couldn’t have the baby at the hospital and had to travel two hours to a larger hospital. I was suddenly desperate to know what we were having. I wanted to know before we had the baby. The trip to the other hospital was terrible. I sat there begging the baby to move, to prove everyone wrong. Andrew and I didn’t speak.

I was induced at 9:00pm on the 11 September 2013. The labour wasn’t hard physically but mentally it was one of the hardest things I’ve done. Eloise Jade was born at 7:00am on the 12 September 2013 at exactly 30 weeks. She weighed a tiny 2lb 3oz (998g) and was 36cms long. She was placed on my chest and when we were told that she was a girl, both Andrew and I cried, hard. I silently pleaded with her to open her eyes, to breath, whimper, cry, anything. I wanted to know if her eyes were blue. I wanted to hear just one cry, instead of the crushing silence. She looked so perfect, laying there, sleeping.

Andrew and I got to spend several hours with her. We got to hold her, talk to her, and let her know that she was loved. We told her about her brothers, her grandparents, uncles, aunties and cousins. We sung to her, told her about the life she would have had. We loved her as much as we could in that short time. Unfortunately, at that time the hospital didn’t have a cuddle cot and so our time was cut short. We had to say goodbye to her. We had to leave her. Leaving the hospital without her was hard, knowing that we wouldn’t see her again, that our little girl wasn’t coming with us. I don’t remember much more of the days or weeks after. It’s all a blur. We later found out that Eloise had died due to an extra-long umbilical cord that was hyper coiled and clotting of the placenta that caused growth restriction. Had we been offered or pushed for scans, we might have been able to save her but we will never know.

Eloise is still a huge part of our family. She’s included in everything we do. We’ve since had 2 more girls, Annabelle Rachel who was born 15 months after we lost Eloise, born in December 2014 and Eleanor Violet born August 2017. I was more aware of during the two pregnancies then I ever was during my first three. I regularly counted the kicks and paid attention to their individual patterns. I was more vocal in what I needed and if I was uncomfortable or uneasy about something, I made sure I didn’t leave the hospital until I felt better.

We will always miss Eloise. Four years on and it’s still hard for me to talk about her without getting teary. There’s always someone missing from our family. Losing Eloise has, however opened up conversations that might not have happened. Loss, it seems, runs in our family, with my nana, my mother, two of my aunties and three of my cousins, all losing babies at different stages. Losing Eloise has changed our lives so much.